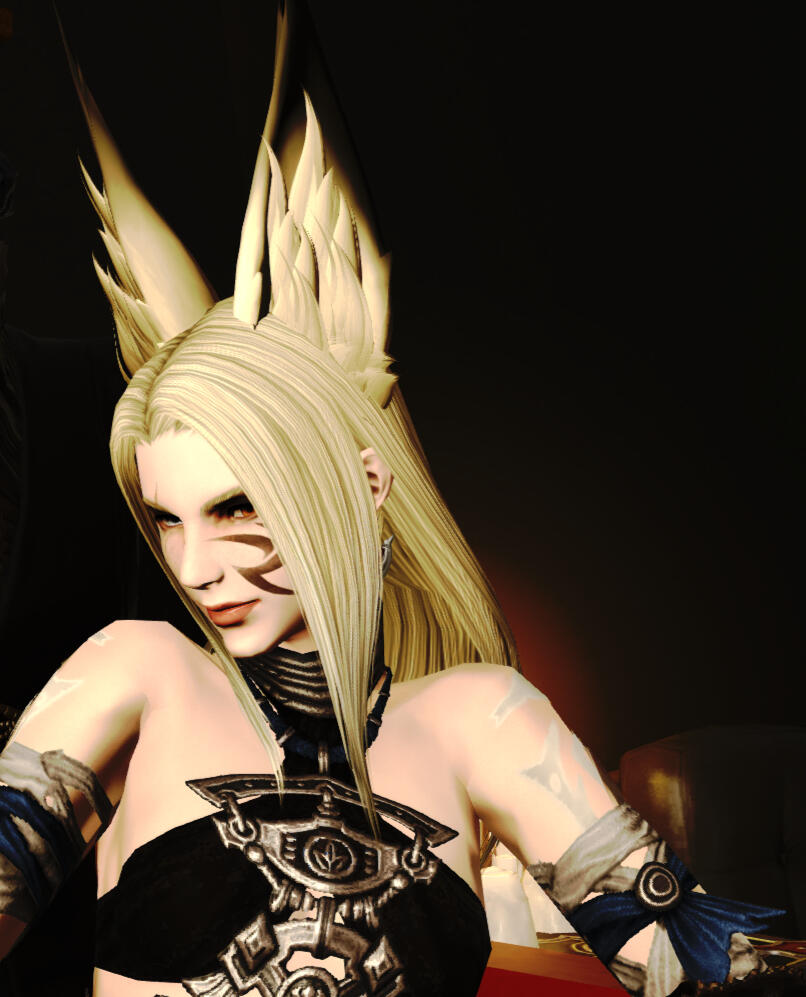 NAME: Kat
AVAILABILITY: Afternoons from 4:30 pm EST to 10:00 pm EST, though on weekends this time is expanded. I am available consistently at near all times on discord
EMAIL: [email protected]
DISCORD: KÄT#6948
IN GAME: Kayt Shepard (Malboro)
ROLEPLAY STYLE: I generally like to take my time and write in a paragraph style for encounters with 1-2 people. For more I do the best I can given how fast the scene is moving. I have a deep love of language and prefer to use formal writing. I do my best to try to adapt to the style of my counterparts when able. I prefer roleplay that has depth to it and focus on interpersonal rp and character development. If there is no contribution to story, I will be unlikely to engage IC.OOC vs IC I keep a very clear line between OOC and IC. Just because my character likes or dislikes you IC, does not mean that I like or dislike you OOC.THEMES: CHARACTER DEVELOPMENT, MERCENARY, MATURE, ROMANCE, SLOW BURN, VIOLENCE, POWER PLAY, COMPETITION, FRIENDS, BETRAYAL, CONTRACTORS/PATRONS, LONG TERM, SLICE OF LIFE, VOIDSENT 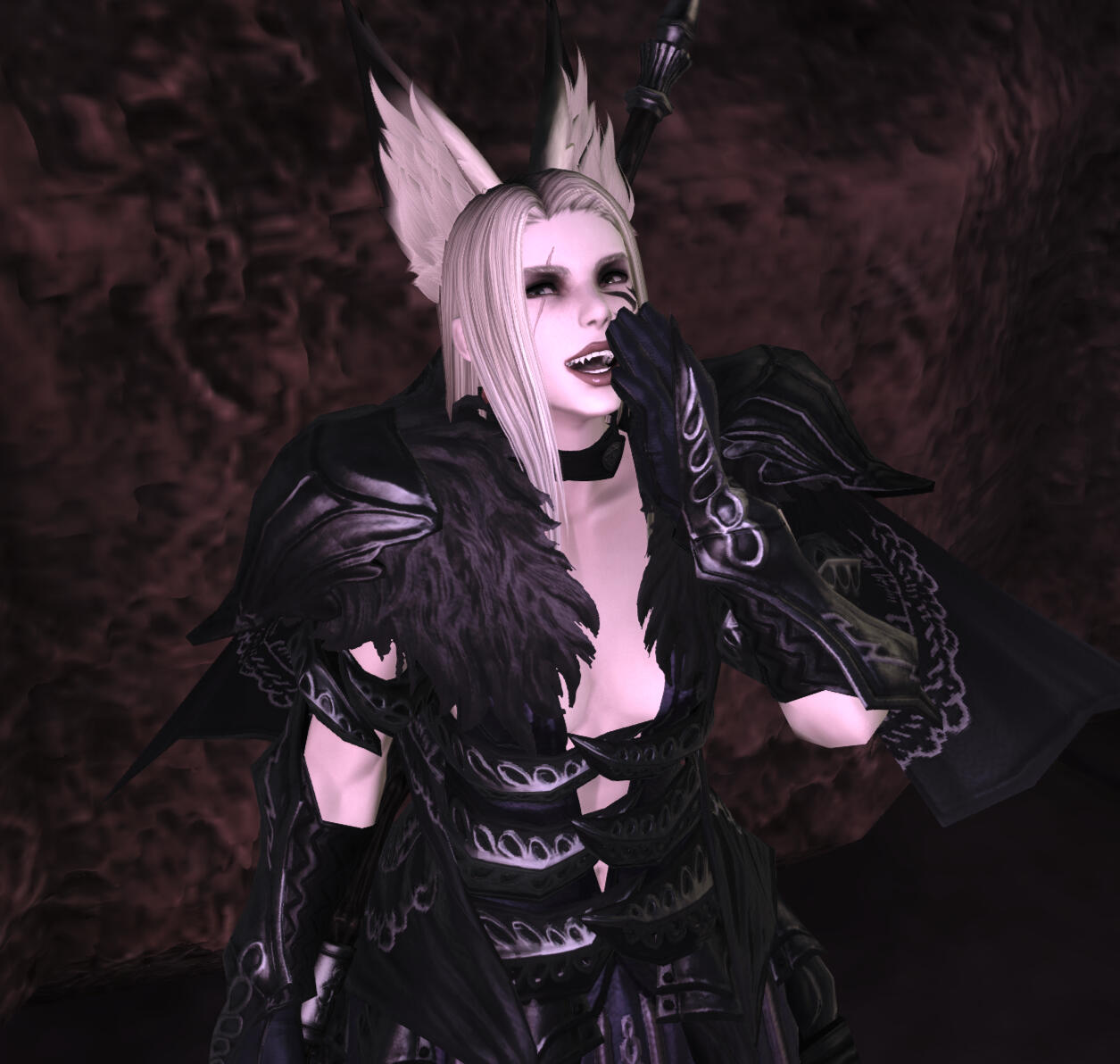 Known History: Daughter of former Admiral Hannah Shepard (deceased) and Matias Shepard (deceased). Disappeared from age 12 to age 17. Joined up with the Crimson Suns at 17 when she reappeared. Left the Crimson Suns at age 28 under unusual circumstances. Currently works as the Proprietess of Null and Void.Reputation in the Crimson Suns: Shepard has a reputation for being ruthless, and rumor has it she went mad on the battlefield leaning into a trancelike rage. Kayt served among the rank of Lieutenant for a few years with only one year as a commander before taking a step back from the organization shortly after the rumor spread she had been driven mad enough to bite into the flesh of a Garlean soldier in an attempt to consume him.Cassius Yatsurugi is the leader of the Crimson Suns; a battle worn Raen, he keeps his growing organization in constant check. The majority of the Crimson Suns are zealously loyal towards Cassius and his presence is undeniable. Some have begun to question his judgement, however, with severing ties with the mad wolf peacefully and without bloodshed. Being one of the only members of the organization to be let go with their life, Cassius has earned the ire among some of his mercenaries who would go out of their way to see the mad wolf stripped of her life. It is rumored that his relationship with Kayt overstepped professional boundaries.Current Day: Breaking free from her past as much as she has been able to, she has found comfort in Qasar. The two seem to have an unusual synergy can can play off each other well in both situations of combat and conversation, much to the dismay and enjoyment of their catte, Kai. While she spends some time at her properties, she has been found more and more frequently sleeping on a boat with the pair. She is fiercely protective of the two, and has been known to consume those who have sought to harm them.

A short exploration into the relationship between highlander and hellhound.

Cassius Yatsurugi and the Crimson Suns are conscripted by former Admmiral Hannah Shepard to retrieve her kidnapped daughter, not realizing what horrors they would find would change the course of history.

As Shepard struggles internally with experiencing a new set of emotions, some old mercenaries decide to pay her a visit and she's forced to reach out to Yatsurugi one last time.

The cake is not a lie, but the chaos is real.

NSFW
DISCLAIMER: This page contains documents and images with adult language and content. It is not suitable for anyone under the age of 18 and may not be suitable for all adult readers

Physical Description (Normal)
In her masked (normal) visage, Kayt's nails are exceptionally strong acting more as talons then nails. She can claw through flesh and tough leather without them bending or breaking. Both of her nipples are pierced with barbells. Apart from the Crimson Suns tattoo on the back of her neck, she currently has no other tattoos. She does have a scarification on the right side of her ribs that reads [N]EEST EIL in dragonspeak which translates roughly into wicked beast harkening to her given moniker of the Mad Wolf. She owns that title proudly displaying the words she herself burned into her own flesh. 5.8 fulms in her "normal" glamoured visage pre-transformation.Physical Description (Voidsent)
Her right eye is a mix of the violet dark energy of the void and a brilliant crimson from the rage within which ultimately translate to a vibrant magenta color. Her teeth can elongate and she possesses both an upper and lower set of fantastically sharp canines. Her cheekbones shift to become more prominent and just a bit higher, giving her room to widen her jaw for a bigger bite of whomever her victim is. The flesh on her cheeks can tear depending on just how wide she opens her maw leaving stretched holes of flesh or even completely torn tendrils depending on her enthusiasm.Her talons become more claw-like and curved in nature. Strips of champagne blonde fur can be found over her shoulders in thin tendrils, on the back of her calves. The anatomy of her legs change, bones shifting or lengthening to mimic the hind legs of a wolf. The shin becomes angled slightly backwards, the ankle connecting to lengthened metatarsals that form the lower 20% of the length, which then become connected to the phalanges which become clawed and spread with varying tufts of fur.One is readily able to tell which aspect is more in control at any given point of time depending on how prominent these qualities become until a full transition. Her last bit of transformation is a massive tail that's lengths is roughly 2 yalms. The fur is thick and coarse with the same champagne blonde color as her hair. It's difficult to get a full grip around the circumference due to the excessive amount of fur.Up until recently due to the situation and magics used when binding Fen'ra to Kayt, she is unable to fully take her hellhound form and the result is a merger between aspects of a hellhound and the highlander. Recently she has been able to fully shift to her full height of 9 fulms.Behavioral Description
Fen'ra will generally leave a mark on mortals that she has interacted with; most frequently a very defined bite at the neck or shoulder as a means of marking them. Permanency, however, is determined by the player of the character and it can be healed if the player so desires. In background, Cassius is known by reputation to have a prominent bite mark on his shoulder he claims to have gotten on the battle with an "incomparable beast".If she is to have an intimate interaction, there are strong aspects of sadomasochism. She relishes the sound of breaking bones, the taste of blood and flesh, and the visual beauty of marring the physical form. As Fen'ra feels that her body is just a vessel, the experience of pain inflicted upon the self is an exquisite experience. She takes immense joy in inflicting and receiving pain, though only under special circumstances does she let anyone truly dominate her - and only after a show of immense strength and conviction. In mortal affairs she will always be dominant.

Ṱ̶̉͑́h̵̠̱̰̤̑̂̉̌͜e̴͇͎̾͑̄̈́ ̷̨̡͈̯̤͊M̷̝̣̟͙̎͆ä̷̹́d̸͈̬͈̝̈̎͝ ̵̼͋͒͝W̶͓͙͕̿͑̉͠o̴̙̺̙͙͍͒͒͊̏l̴͓͕̎͊̓f̵̩͈̰̈́̊Sundered flesh waters the ground with blood,
How rich the sound of each drop!
The scent lingers in the air, metallic and rich,
Your pain is coin; we are nearing the fever-pitch
How could you possibly expect me to stop?
Do not thrust your expectations upon my shoulders,
It is unfair in your misery to seek my mercy,
When none was ever granted in my time,
Your life has been bought in the years of your prime,
To me, your death, provides no controversy:Only B̸̥̐̄l̵̪̐o̸̥̅͂o̸̙̟͆d̴̛̰͎ and C̵̭͙͗̈́ọ̷̢͗ḯ̸̙͚n̶̢͑͘. 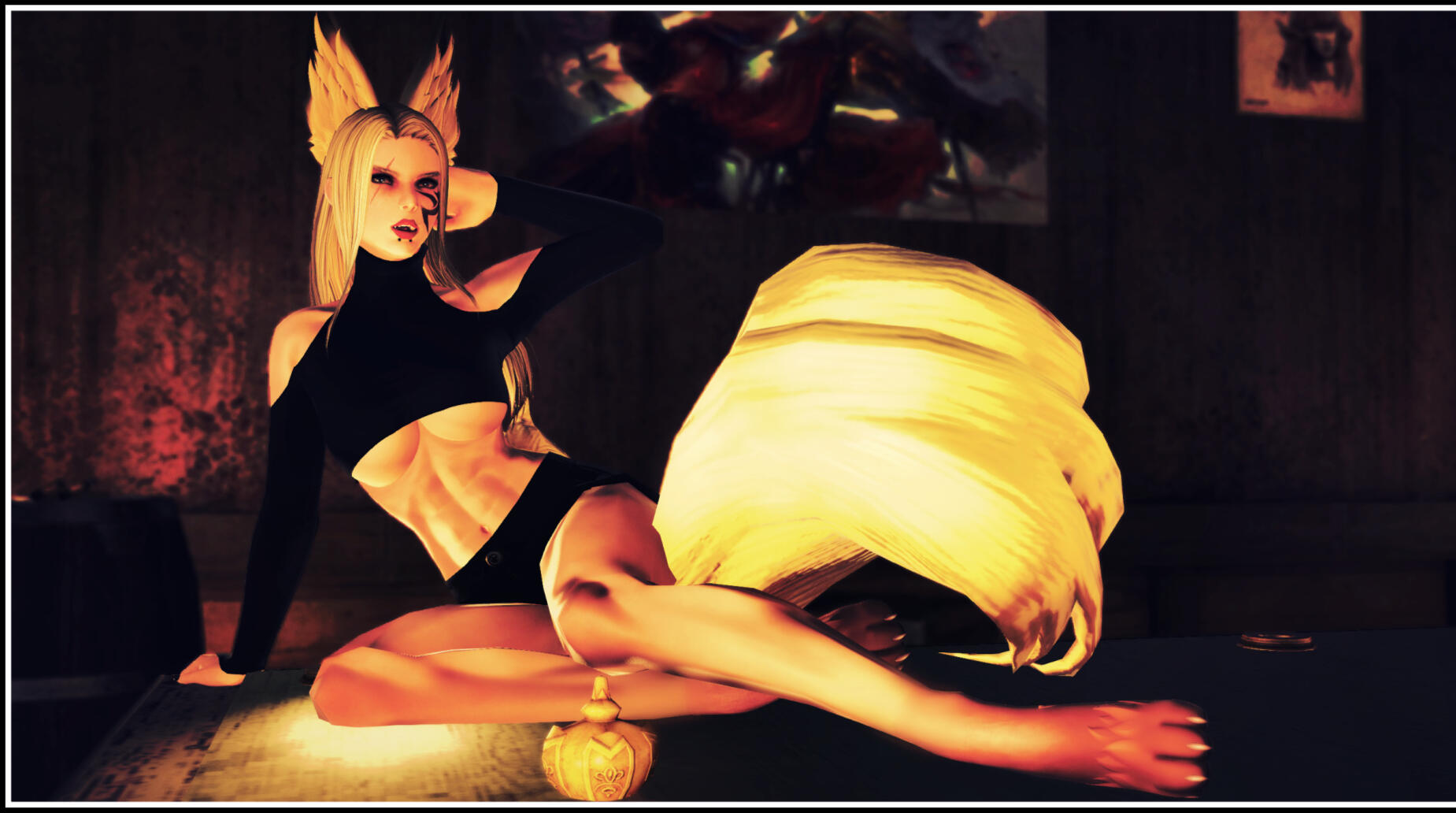 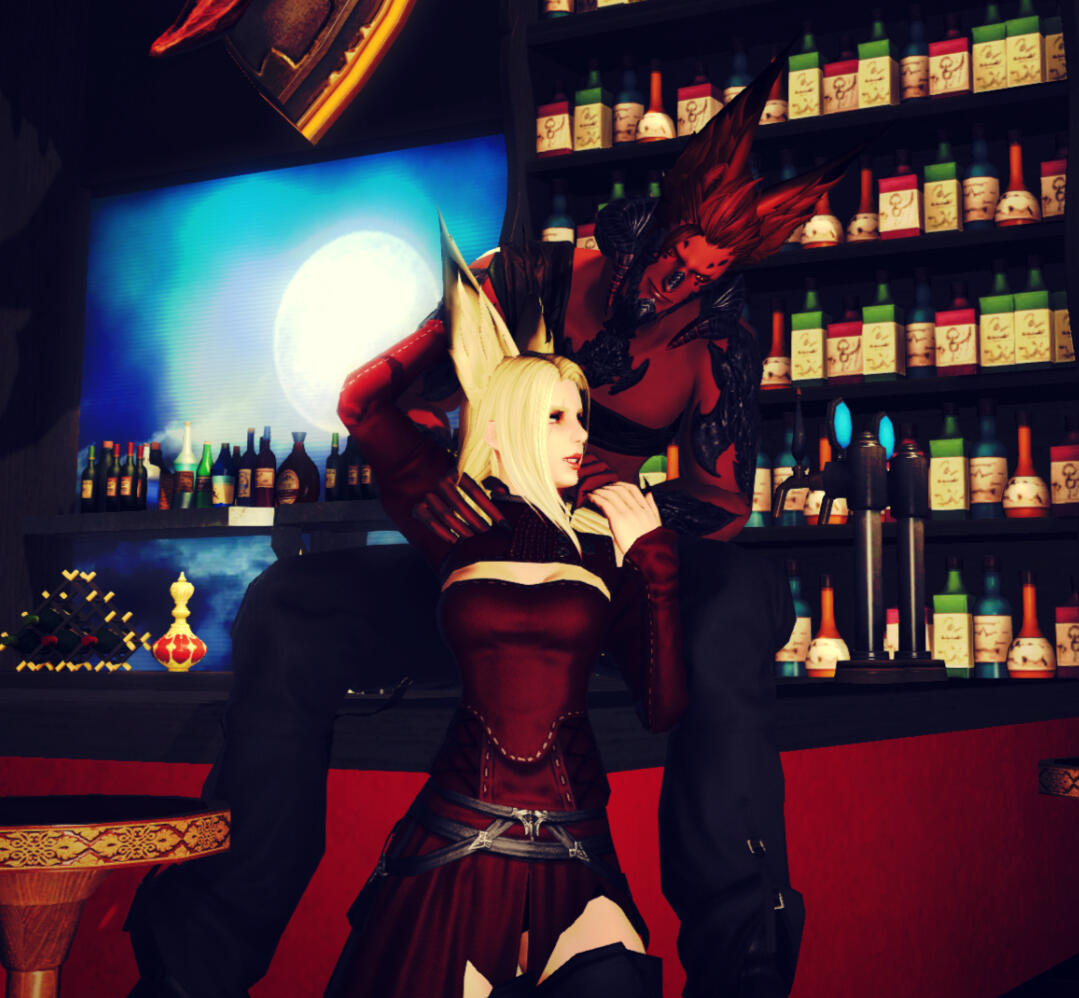